Sweden is number one in Good Country Index

The Good Country Index (GCI) is a yearly study that examines and measures how nations contribute to the common good of humanity. Of the 149 countries included in the 2020 GCI, Sweden ranks 1st. Sweden also reached first place in 2016. 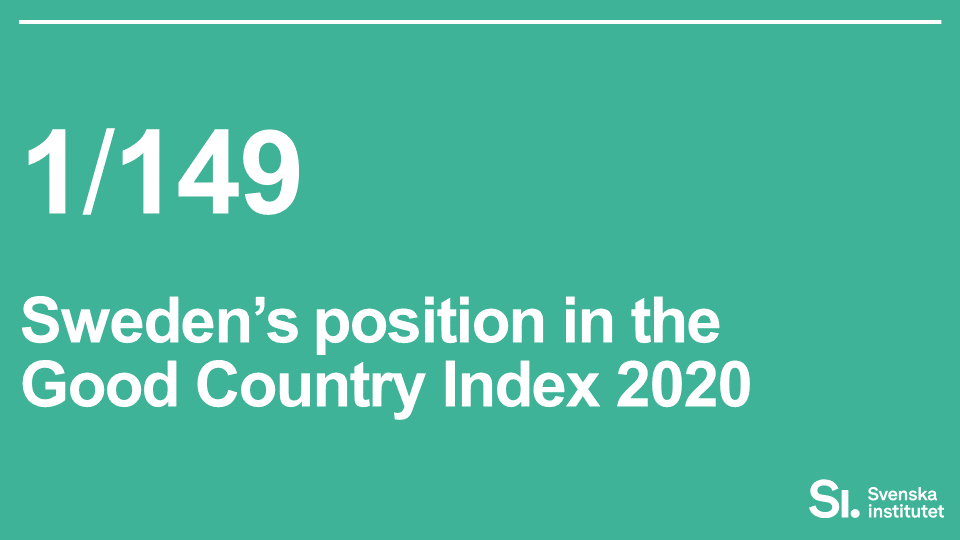 The areas in which Sweden ranks particularly highly – i.e. where Sweden contributes positively for the good of humanity – relate to Sweden’s global contributions to health and well-being, to planet and climate issues and its contributions to culture.

The index is made up of seven categories that all relate to how countries contribute to global the good of humanity. For each category, different indicators are used, derived from different official data sources, such as the UN, UNESCO, UNHCR and the World Bank. The GCI reports on each country’s international impacts, positive and negative, outside its own borders.

The seven categories – and Sweden’s rank in each category – are:

The category in which Sweden contributes the most to the good of humanity relates to health and wellbeing, where Sweden is ranked third of 149 countries. Within this category Sweden performs particularly well on the indicators that measure pharmaceutical exports, food aid and donations to the WHO. In the category planet and climate, the indicators environmental agreements compliance, hazardous pesticides exports and ecological footprint are where Sweden performs particularly well. In the category culture, Sweden ranks especially highly in relation to press freedom, freedom of movement and creative services exports.

Sweden’s ranks relatively low in the category international peace and security, which is primarily due to Sweden’s arms exports relative to the size of the Swedish economy. Of the countries that rank among the top 10 in the GCI, all perform relatively poorly in relation to global contribution to international peace and security, including the Nordic countries (except for Iceland).

There is a significant overlap of how countries contribute to the common good of humanity and how favorably countries are perceived. The countries that rank highly in the GCI also tend to perform well in the Nation Brands Index (NBI), and index that measures how 50 country brands, including Sweden’s, are perceived. According to Simon Anholt, founder of both the GCI and the NBI, there is a significant correlation between how a country acts in the international arena and how that country is perceived.

In other words, how Sweden contributes to the good of humanity correlates with how Sweden is perceived abroad.